A Closer Look at the Micronutrients of Plant-Based Protein

Surprise! — following a plant-based diet is not, all by itself, necessarily healthy. You need to balance intake of various foods to meet your nutritional needs. Vegans and vegetarians should be aware of and choose carefully from the myriad types of foods available, which include vegetables, fruits, whole grains, nuts, and seeds to obtain key nutrients. It is remarkably easy to become deficient in an essential nutrient.

Protein and Omega-3 fatty acids are often cited as the nutrients that a vegetarian or vegan may lack. Rightly so, because fatty acids Omega 3 Fatty Acids are critical but hard to come by in a plant-based diet. At the same time, we can’t overlook the micronutrients that support key functions in the body. Vegetarians and vegans — and everyone else — are particularly prone to lacking some of these essential minerals and vitamins. Let’s take a look at the micronutrients for which vegans, vegetarians and omnivores are at highest risk of deficiency.

Iron is an essential mineral which is vital for both the transport of oxygen in red blood cells and for oxidation by cells. Iron deficiency can result in low energy levels, shortness of breath, headaches, irritability, dizziness, or anemia.

Traditional food sources of iron include meat, poultry, eggs, specific vegetables, and cereals. Studies of Western countries show that vegetarians tend to consume the same amount of iron as meat eaters.1 However, the iron in meat is more readily absorbed than non-heme iron (the kind found in most plant foods); thus, the recommended daily intake of iron for vegetarians is 1.8 times higher than for non-vegetarians.2

Researchers determined that iron is a nutrient of concern for vegetarians. Vegetarians exhibit a high prevalence of depleted iron stores and, compared to non-vegetarians, a higher risk for developing low iron stores, iron depletion, and associated iron deficiency anemia.

Copper is an essential trace mineral. Together with iron, it plays a role both in forming making red blood cells and in maintaining nerve cells and the immune system. Copper helps the body absorb iron, form collagen, and maintain healthy bones, blood vessels, nerves, and immune function. Low copper levels have been linked to both high cholesterol and high blood pressure.3

The 2014 National Diet and Nutrition Survey in the U.K. found that while most people in the general population get enough copper, women are falling short of the target. The average intake of women aged 19 to 64 years was 86 per cent of the recommended amount, for women over 65 it was slightly better at 90 per cent.

Zinc is a trace element necessary for a healthy immune system. It also helps to stimulate the activity of at least 100 different enzymes and is responsible for a number of functions in the human body, including correctly synthesizing DNA, promoting healthy growth during childhood, and healing wounds.

Although zinc is found in many foods, deficiency can occur if there is insufficient consumption from diet or supplementation.5  In fact, The 2016 National Diet and Nutrition Survey in the U.K. confirmed shortfalls in both sexes and every age group, across all diets.

Magnesium is an essential mineral that plays a role in over 300 enzymatic reactions within the body, including the metabolism of food, synthesis of fatty acids and proteins, and the transmission of nerve impulses.6

Magnesium helps to maintain proper levels of other minerals such as calcium, potassium, and zinc. Magnesium deficiency, though rare, is linked to insulin resistance, metabolic syndrome, coronary heart disease, and osteoporosis.

Chalk one up for the vegans with magnesium intake!  A 2016 European Prospective Investigation into Cancer and Nutrition-Oxford (EPIC) study found that vegans had the highest intake of magnesium compared to meat-eaters, fish-eaters and vegetarians.

The best sources of magnesium, all of which qualify as both vegetarian and vegan, include nuts, seeds, dark green vegetables, whole grains, and legumes. Most common fruits, meat, and fish contain low levels of magnesium.7

Meeting the Nutrient Need…Without the Meat

Now that we’ve “zoomed in” to discuss micronutrients at risk of deficiency for vegans, vegetarians (and everyone else), let’s zoom back out to the big picture of macronutrients and the top concerns of those following a vegetarian diet—not getting enough protein and Omega-3 fatty acids.  In light of all the nutrients vegetarians still require as a result of abstaining from meat, is there such a thing as the “optimal vegan protein”?

There is, and one category of food, in particular, fits the bill—hemp seeds and hemp seed-based ingredients.

Let’s take a closer look at the nutrition of Shelled Hemp Seeds:

Shelled Hemp Seeds are the simplest way to enjoy all the benefits of the hemp seed.

They offer high nutritional density across a broad range of micronutrients, resulting in tremendous nutritional benefits per serving in a tasty little package:

Victory Hemp V-70 Hemp Protein, made from hemp hearts, is a seed-based protein and a favorable ingredient option that provides high levels of critical minerals with a % RDA per 1-ounce serving of 25% iron and 90% magnesium.

V-70 Hemp Protein is a neutrally flavored, near-white colored, flowable powder from the hemp seed heart. V-70 Hemp Protein provides high water- and oil-binding capacity while emulsifying well. It has a clean, neutral flavor with no need for flavor-masking agents.

Shelled hemp seeds and hemp seed heart-based ingredients can serve as an important source of healthy macronutrients and micronutrients in a wide variety of plant-based foods.

Interested in a Plant-Based Diet? Don’t Forget this Staple Source of Vegetarian Protein

‘Optimal’ Vegan Protein: It Does Exist

END_OF_DOCUMENT_TOKEN_TO_BE_REPLACED 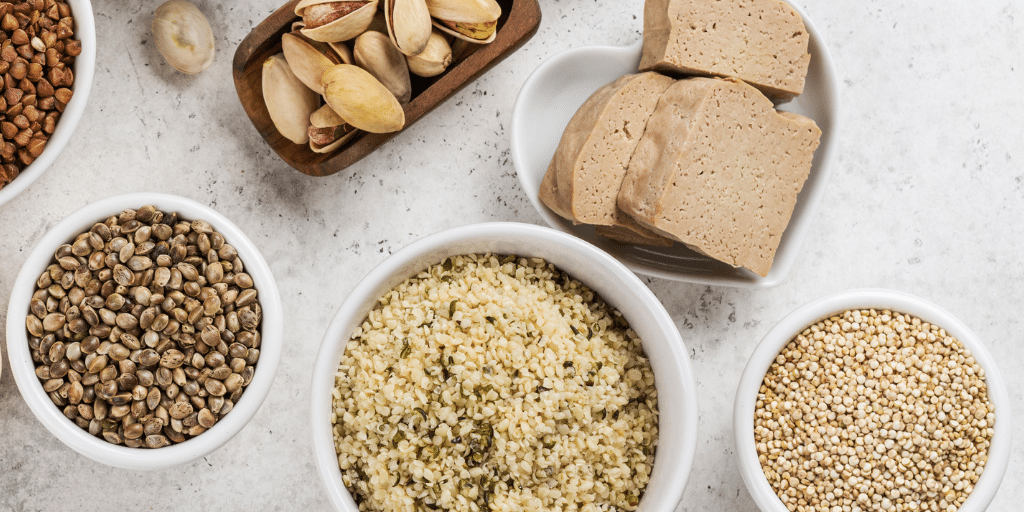 An Amino Acid Profile Comparison: Hemp vs. Other Plant Proteins

Plant proteins are on the rise—and the market for them is expected to grow significantly from 2021 to 2028, according ...